There is nothing better than a good night’s sleep. Unfortunately, last night I wasn’t able to enjoy the aforementioned pleasure for a reason that can summed up in two words: ‘Race Pace’. I pushed myself super hard yesterday and despite enjoying the race pace very much indeed, I should have kept in mind the 800 or so miles I had left to cover before proper recuperation could be had. And so restlessness was upon me all night as I woke up with legs feeling like solid blocks of lead. The morning finally came, and my lack of leg function was confirmed with a backwards topple over our clothes bag as I tried to put on the long lycra leggings. This was to Mrs W’s great amusement, and she fell about laughing as I pulled myself off the floor.

With breakfast out of the way (I’m favouring bacon and a boiled egg at the moment) I got my kit together and set on my way. Definitely no race pace today, or indeed any other days of this trip. It was pretty hard going and the legs were certainly objecting to the relentless regime I have been submitting them to. But then things look up. The sun came out, the wind was slight, and I was happily doddering along at my own pace enjoying the scenery. 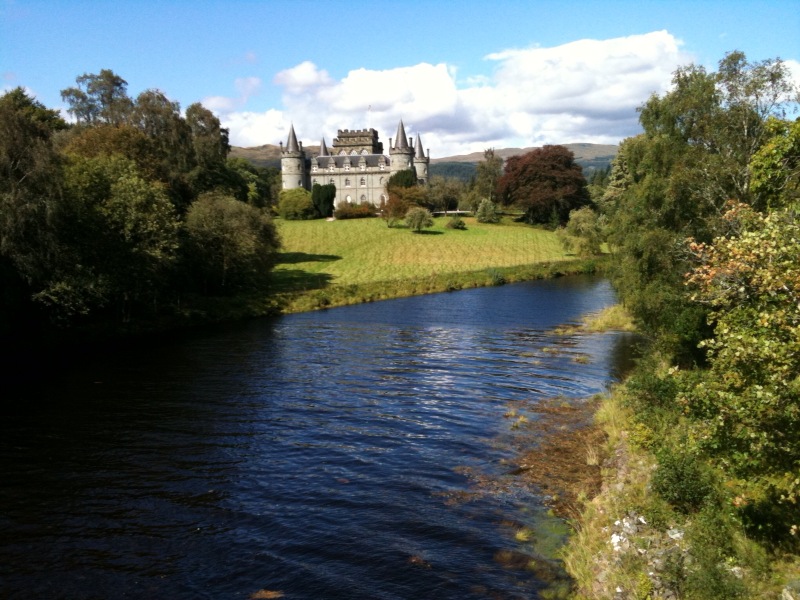 The combination of vast mountains, lochs, quaint villages and woodland made today a real joy. I can honestly say that it was the best days cycling so far – perhaps partly due to the relaxed pace, perhaps the scenery, or maybe it was just because I was finally settling into this thing, but for whatever reason, everything just clicked. Don’t get me wrong, the stunning mountains of the far north were impressive, and the vast lochs we had already travelled past were stunning, but today there was just the perfect combination of all elements which drew everything together that I have begun to love about Scotland.

Progress was slow, mainly because of the countless photo stops, and in many cases the about turns to go back to a little waterfall or viewpoint I had just whizzed by. I came across a wonderful little river, and took some time out, relaxing in the sun. It was warm and serene, and for a while I forgot that my legs were slowly ceasing to work.

Legs are amazing. The fact you have two, in particular. That sounds stupid I know but let me explain. Obviously having two is useful to walk and run, but there is an added benefit to the cyclist (apart from the basic functionality). Countless times I have had twinges and pains in one leg, especially at the start of a ride, but because of the genius of having two of the things I’ve been able to just cycle with one leg for a while (keeping the other clipped in) and this nearly always sorts the problem. Ok that sounds odd. I’ll leave it there (but if you are a roadie you may understand?).

I passed more and more wonderful scenery at my slow pace, and stopped on a small bridge to take a photo of the most picturesque castle I have ever seen. The sun was still out, there was a slight headwind and I only had around 15 miles to the lunch stop. Passing a sign saying ‘Britain’s tallest tree’ I felt I had to take a look and doubled back to take the turn. I would have expected this tree to be, well, tall, and I guess I expected it to stick out like a very, well, tall tree. Anyway, if there was ever a tall tree down that track I didn’t see it. It transpires that Mrs W also saw the sign, also took the turn, and also didn’t find the tree.

And then the climb began. The road loomed ahead and the incline was clear to see. This was going to be a long one. It seemed as though I was cycling up a mountain, just very slowly, and I reckon this probably was the case. I’ve not looked at the elevation plot yet but I suspect a constant upwards gradient will be clear. About half way up a familiar grey A4 with roof box passed and pulled into a lay-by. I chatted to Tasha for a while, took some photos and continued up the pass. As I rounded the corner at the top I realised there was a benefit to be gained from the hard work – an immense downhill. And immense it was – I guess around 1 mile of super fast good quality road. Even the logging lorries didn’t put me off and I only touched the brakes a little when the speed wobbles started. This hill took me all the way to our lunch spot where I once again ate all the bad things your dentist would hate under the guise of taking on calories.

Setting off again the scenery was about to dramatically change. First there was some kind of MOD center with barbed wire everywhere and a navy ship in a harbour. Then there was Helensborough where civilisation really began to sprawl along the route. Before long I was heading into Glasgow and the traffic was getting heavy. Center of Glasgow during rush hour – good planning? I decided to don the high viz jacket instead of just the fluorescent vest, as I was happy to trade overheating for safety. I switched to a zoomed in scrolling google map on the iphone and it worked a treat. I was navigating this city with no problems at all – when the technology works its just great. I was making good progress when a courier on a carbon Trek overtook me. Well, clearly, I wasn’t having that. No sirrree. I didn’t care about the lead legs any more, ReubiMax just took over, the water was taken, the tucked position adopted and the gears shifted up. Now this poor chap had made the mistake I had outlined in a previous blog of going hell for leather to overtake me. I tailed him for a half mile and he began to flag, at which point I sailed past, trying to make the manoeuvre look as nonchalant as possible. Oh dear, I hear you say. Well, you have to have a bit of fun after 80-90 miles riding. Reaching the Travelodge on time I spotted the Audi at the crossroads opposite, waiting, I presumed, to turn like I was. As I turned into the car park, Mrs W sailed past in the wrong direction. Oops. Of course she blamed it on Jane (the TomTom).

I should say though, that I am immensely proud and thankful to my wonderful wife Tasha for the help and support she has been giving me on this trip. I’m probably not the best chap to be with after a long ride by which time I’m covered in dust and stink like a wet dog. So even more reason to thank my lucky stars that I have such an understanding other half!

Distance today: 89 miles, total so far 358 miles. Here is the route and photos (by the way the videos for Day 3 are now up as well):