Having gone to bed unable to bend my right leg past a certain point I was relieved to find this issue had been resolved by a good nights sleep. Over breakfast we met another couple of ex-joglers, and spent some time chatting about routes, kit and sponsorship. Everyone has so far been very impressed with the iPhone EveryTrail solution coupled with the DIY extension battery – perhaps a new product! They kindly parted with a donation, which was very kind.

I set off, with legs feeling heavy but just about ok, and after the first corner the wind was back up again! Smiling to myself I figured it was just someone up above having fun with me, seeing how far they could push me, and I was determined to win the battle, so just soldiered on and on. 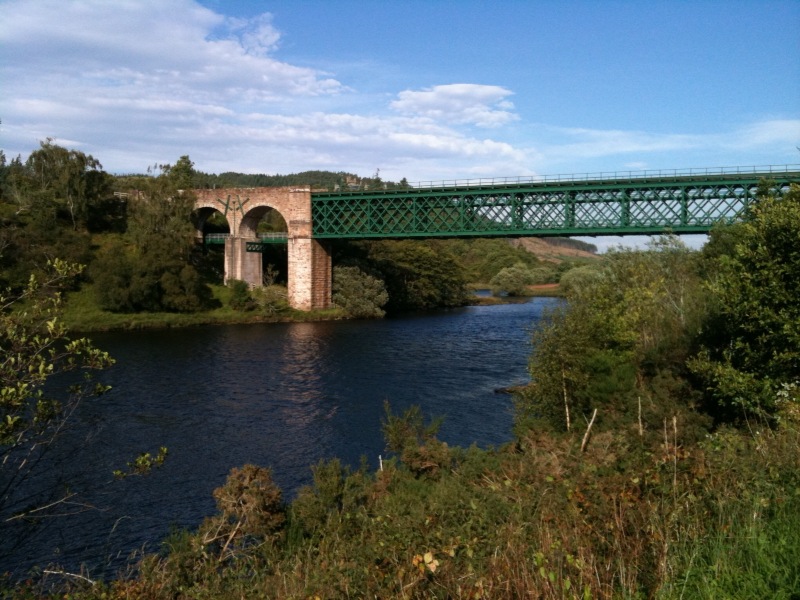 The hill out of Ardcronie was a brute with the head wind, but the sun was shining and it was manageable, unlike yesterday! I climbed for a reasonable amount of time until right on top of the flats, where it was pretty exposed and progress was slow. Again I was down to around half my usual speed. There is nothing more depressing than knowing you are riding so much slower than usual, but you just have to accept it and realise that its getting to the end point that’s important.

On to Alness and Dingwall for lunch, which Tasha had already acquired from the local Tesco. Salty crisps seem to go down well – probably my body wanting to replace the sodium lost through sweat? I felt pretty rough at this point – the legs were really suffering and it was warm and cosy in the car – I almost fell asleep once or twice. I really didn’t fancy getting back in the saddle – a low point for sure.

A short while later I headed off again, and the going was better. After 15 miles of more wind it started becoming less of an issue and the cycling was slowly getting better. Around half way through the second leg I heard sirens being switched on behind me. My mind went back to the first few weeks I had the Merc (!) but luckily it wasn’t for me. My energy slowly being used up, I once more had the ‘body STOP’ moment and took on some food and fastics. As the route took me towards the top of loch Ness things really started to improve. The wind finally became a non issue and I was restored back to the usual progressive kind of riding that I am so used to. The miles flew by and the rise and fall of the road next to the loch just encouraged more and more speed.

Now, I should say that I have been trying hard to stop ReubiMax raising his ugly head, but sometimes there is little I can do, especially when another group of End to Enders comes in sight. A swig of water, the hands shift to the drops, the head goes down and the gears shift up. There is something in me that just has to overtake anyone in front (I realise this is not always a good thing!). I have learnt over time there is a technique to the ‘casual fellow-rider overtake’ for there are pitfalls you should avoid, such as gunning it past them then as the adrenalin wears off lagging back again only to be overtaken very smugly by the same riders. So the solution, I have found, is to accept that if you have just seen them on the horizon then you will catch them up at your existing speed, as clearly you are travelling faster, then when you are right behind you hold back a little, saving up a bit of energy for a convincing overtake manoeuvre and a few minutes of good progress to avoid embarrassment. Trust me, you think about these things when on such long rides. I know, I am an unusual chap!

So I rolled into the B&B feeling great, and the leg worries had mostly evaporated. Definitely pleased I had a shorter day today and with a good rest I’ll be on good form tomorrow. Distance today: 77 miles, total so far 180 miles.

Here is the route and photos: