[Apologies in advance: its long!]

Several times in the night I awoke to the sound of rain hammering down on the velux window above our heads. Each and every time I groaned at the thought of having to cycle through such misery in the morning and when it finally arrived the wet weather had not subsided. However, I was pleased to find out that the dark overcast skies I had been staring at all night and into the early hours of the morning, were in fact a discoloured blind that Mrs W had pulled down the night before!

I had somehow put myself down for a full cooked breakfast; the lady had asked me my choice just as I arrived the evening before and all I could manage to murmer was the answer ‘yes’ to every question she posed. As it happened the cooked option went down well, along with cereal, multiple pieces of toast and plenty of orange juice. I wasn’t going to repeat the empty fuel tank of the day before, at any cost, although I did pass on the ‘sausage slice’ which looked as bad as it sounds. After deliberating for a good ten minutes about whether to wear one or two extra layers (on account of the rain) I went for just the one. This turned out to be a great choice, as the day brightened up later. Tasha was about to drive off when I noticed the roof box was still ajar. Oops (sorry Mike!). Had this not been noticed then when all the contents had inevitably been spilled onto a suitable A-road later in the day, Tasha would have also noticed that all our clothes were still sat in the main piece of luggage in the B&B hallway. So yes, a doubly lucky spot that one!

I set off with my legs feeling like lead again and before long noticed that EveryTrail was playing up. It’s been a little temperamental recently, and often crashes. I had to restart the tracking a mile down the road, but at the end of the day discovered that the track it had completed was corrupted and there was no way I could upload it to the website. This is a real shame, but I have put together the route and added the photos I took manually instead. All its missing is the statistics – elevation, speed etc…

The morning passed quickly – after around 30 mins of my legs warming up the ride turned very much into RacePace once again. The weather and uneventful scenery meant there was little point in stopping apart from photographing the occasional fine looking cow or comedy place name. Some guy in a white van in Dumfries yelled something along the lines of ‘You got a sail there son’ at me through his open window. No idea. You get some special people along the way, you really do. Reaching Gretna early, I was able to take a short look around and found the inevitable One Stop Wedding Parlour: Phil and Tina – we could have saved some money there eh? I also found the Gretna Outlet Village and was in two minds about whether to mention its existence to Mrs W when she arrived, but my conscience got the better of me and we headed over to take a look. Luckily there were no shops that really passed her approval, and from my point of view a Ralph Lauren shirt at £60 is still an expensive shirt, even if it has £99 crossed out above it, so we came away empty handed. 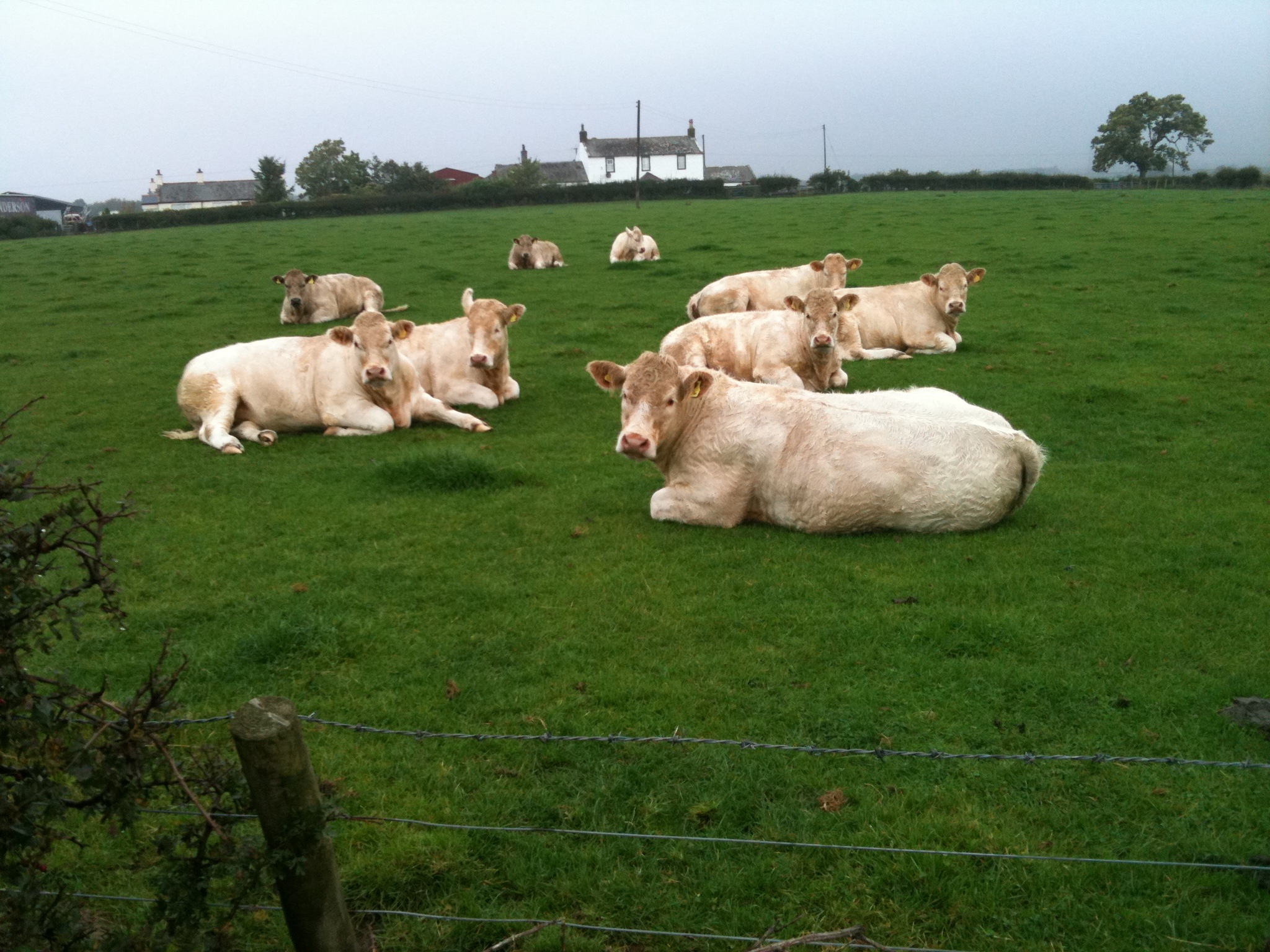 Heading off again after lunch I crossed the border – it was certainly a photo moment and quite a threshold psychologically. I had left Scotland and with every hour and day was getting closer to the end goal. An amazing road running right next to the M6 took me along for a good fast 5 or so miles. And when I say right next to the motorway I mean it was actually an additional two lanes OF the motorway, separated only by a concrete barrier. Smooth, flat and fast. Awesome. And then came Carlisle, which was scary and super busy, and I found myself numerous times in the middle of two dual carriageway lanes in gridlock traffic on the run up to a junction or roundabout. Definitely had to keep my wits about me there and I swapped a layer for the high viz jacket to prevent any mishaps. At one point I cut up a car at a junction, pulling in front of it to get into the cycle only section at the front (the lights were red). Looking back I saw a policeman starting at my through the windshield. Clever boy Reuben. I must have got away with it or he was too interested in whatever it was he was eating as the blue and twos stayed firmly off.

Out of Carlisle I took the A595 which was a nightmare, but I’m not sure there was any other option. The cars were passing fast and close and it wasn’t a happy time. I’ll gloss over the details for the benefit of my mother! Finally I took the A591 towards Keswick, a road which was quieter and well surfaced. This was the scene of a slightly more exposed lego man adventure. I hope no one thought I was attempting some kind of vandalism, as it must have looked odd from the viewpoint of passers by:

So I reached Keswick and met up with my good wife. It had been a very fast day – I would hazard a guess that I was approaching RacePace for around 80% of the distance, which is a surprise given how tired my legs are these days. I would have been fascinated by the average speed but as I mentioned, EveryTrail failed me on this occasion so I can only guess at around 16 – 17 mph. I wanted to spend a moment (sigh – it continues?!?) to detail the state of my body and mind, for I know there are some who are interested in the toll this kind of adventure takes on a person:

MIND: well let’s face it, this always has been compromised to a degree, but joking aside I have to confirm that the cliché really is true – it really IS all in the mind. It is your mind that starts to think that your body is too tired and you should stop or that you cannot make it to the end, yet it is the same mind that can spur you on and convince you anything is possible. Whenever I have a tough spot, and there have been a few, I give myself a good talking to – for example ‘well, Reuben, this is a perfect example of heavy rain, a headwind, an uphill poorly surfaced road and a bad stomach, but if you can conquer this, you can conquer anything’ and, miraculously, it works. My two cents is that in our highly developed everyday lives we never experience anything close to the kind of physical endurance we may be capable of, and so our thresholds of what we believe we can achieve are set far below their real extents. Is this true, who knows. Only one way to find out!

BODY: well really its just fairly predictable – I cannot express strongly enough how much the tops of my legs ache. And it gets worse with every day that has passed – to the extent that walking down stairs is difficult. I’ve lost my balance a few times because of the pains – normally looking like some kind of drunk as a result. My tendons and ligaments are on a bit of a tightrope but I treat them with great respect – stretching properly before and after every day. My arms ache just as much as my legs, mainly because of the poor road surfaces and 60 psi tyres. My hands are developing hard callused areas where the handlebar pressure is greatest. Saddle sore hasn’t been too much of an issue but liberal application of Vaseline may have helped there (I’ll go no further on that one). The more I think about it the more I realise I’m beginning to look like a bit of a tramp, and when I walk with Tasha down the street then people must think she is taking care of me on day release! I decided, in the spirit of adventure, not to shave for the duration of the challenge (Mrs W doesn’t approve), and the freckles on my face, especially nose, are beginning to join up. Bags have appeared under my eyes and I can only think that may be due to constantly looking upwards whilst cycling. Who knows. Anyway, you get the idea. I don’t look pretty.