Is it normal to keep waking up during the night despite your whole body needing rest? Who knows, perhaps that’s what this kind of routine does to you. Our host, Ronnie, was excellent and the cooked breakfast was well received. This morning was going to be very different ride – I was going to be joined by Chris (Thorpe) for the first leg of the journey from Keswick to Morecambe. He arrived just as we were leaving our B&B and before you ask, yes it was raining. I got the bike together, put on the jacket and rest of the gear and we set off on the 50mile first leg through the Lake District and beyond. The scenery was excellent, probably some of the best so far so there were plenty of opportunities for photos. Having a riding partner was a great change from having to put up with my own company all the time, so I was pleased Chris had offered to join me. There was a certain amount of racepace, as you would expect, but try as I might I couldn’t shake Thorpe from my rear wheel. You can enjoy an additional selection of photos today, scattered throughout this blog and these courtesy of Thorpe’s camera. 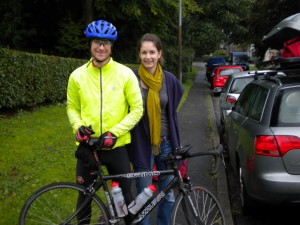 One particularly amusing moment was when the first serious downhill arrived – I went straight for full effort assuming that Thorpe would be left in the dust. As I reached the bottom of the hill I pulled into a lay-by to wait for him to catch up, and began to take the iPhone out to snap a picture whilst looking over my right shoulder for his arrival. I couldn’t see him – surely he wasn’t that slow? Then I heard someone beckon me from my left and it turned out he had been in my slip stream the whole way and pulled in just as I did! Well, that made it clear – to shake the Thorpe it would take a whole new level of RacePace… 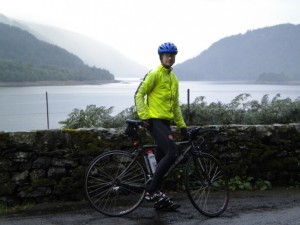 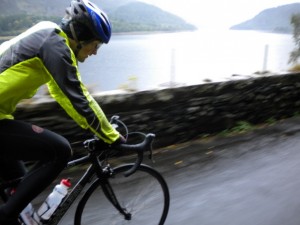 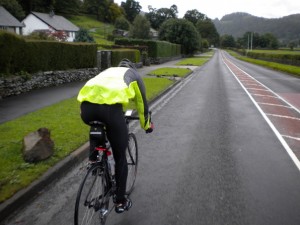 We stopped to say hi to Chris’ sister in the street in Keswick then continued on our way. Despite putting in the effort, still Thorpe wasn’t budging from my back tyre – I had to go for the long haul strategy and just wait it out. Some of you may question my level of competiveness, but rest assured this is par for the course on Thursday Shipham rides and I have no doubt that Thorpe expected as much. We stopped in Windermere as a possible Lego Man outing but there were too many tourists around (I later regretted the poor Lego Man action that was had today). Thorpe had his camera and took some shots as we cycled side by side – this was a novelty as until now I’ve not really had many of me on the bike, as there is never anyone there when I ride to take them! The Lego Men finally made an outing on an upturned bathtub in a Field somewhere south of Windermere. As Thorpe pointed out, this didn’t exactly sum up the area particularly well, but when the Lego Men want an outing, there isn’t much I can do to stop them. And let’s face it; the whole series of Lego Men videos isn’t exactly sane or predictable, so at least they are consistent. What was a little worrying was that a guy came out of a house a couple of 100 meters away to watch us when I started putting it together – we didnt spot a shotgun but you can never be too sure, so there was some time pressure on this one…

As Thorpe took a picture of me next to a signpost, a dodgy looking guy turned up in a 4×4 and asked if he wanted a picture of both of us together. As temporary custodian of the iPhone, which is the crux of the navigation for this whole trip, I was glad Thorpe didn’t hand over the device, which would have surely ended up as a BIN on ebay before the day was out. 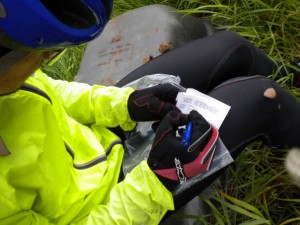 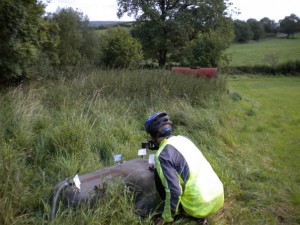 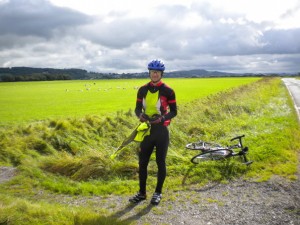 The miles went by and before long we were on the A6 heading towards Lancaster. The road wasn’t the best, a little boring perhaps, but the progress was excellent. EveryTrail was playing up again but seemed to just about function, and the weather was better by this point. Unfortunately, however, it wasn’t going to hold and the wind started to pick up as we approached Morecambe and as we headed down the seafront it began to rain heavily. Always the best of timings, the British weather! I spotted the roof box from a few 100 meters away and it was lunch time at last. It had been an excellent ride and Chris held his own the whole way. Once again Mrs W had done us proud with sandwiches, crisps, drinks, flapjack, brownies and other goodies but there was one problem – the car had only one spare seat, and it was wet, very wet. So naturally I climbed into the boot and ate mine from there. 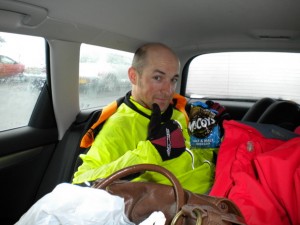 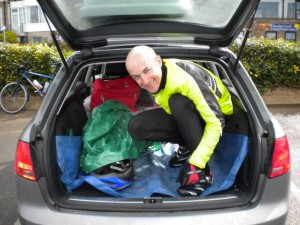 Chris set off shortly afterwards, heading back to the Lakes, and hopefully will have completed his century in doing so. I realised at the point he left, that EveryTrail had been merrily tracking us eating our lunch for 30 minutes or so, so that was the average rendered meaningless again! I waited a little longer for the food to go down then headed off myself. It was certainly a more laid back ride than the morning, and the weather soon improved leading to a relaxed and enjoyable second half of the day. Lancaster centre was typical traffic nightmare as was Preston, and despite getting used to it I’m still not a fan of city riding, especially as I always seem to end up in the middle lane of a dual carriageway with cars both sides! The riding improved and the A6 was followed for many miles – the Lego Man decided to hog my brake cables again for a while.

A small detour here and there and a change of destination due to no room at the (Premier) Inn meant the whole ride ended up being 103 miles. My second century of the JOGLE, and it looks like there will be one tomorrow and the next day as well! Fingers crossed the legs will hold out. Distance today: 103 miles, total so far 636 miles. I’m sure Thorpe will post a comment with his alternative version of the morning – so watch out for that! Route and photos:

4 thoughts on “JOGLE Day 7: Thorpe and a century”